Copyright Notice
All materials, graphics, patterns, design, and information are the sole intellectual property of Helene Jacobs aka Baroness Betha and are not to be used without permission.

If you would like to see other things that Helene makes and does, visit her at:

As an Amazon Associate I earn
from qualifying purchases

What Should We Call This Type of Chain?

What is commonly known as Viking Knit, Viking Chain Knitting, Wire Weaving, Viking Wire Weaving, Trichinopoly and the technique in my book Ancient Wire, is a series of loops like cursive e's or l's. The wire crosses itself as it loops through previous rows.  A large version of these loops can be seen in the images from my Cloven Orange Ornament tutorial.

Woven wire chains of this type have been found at Birka (ca 800 - 900 AD) and also in the Roman, Greek and Byzantine civilizations (4th century BC to 1st century AD).  Chains such as this can be found with pendants, in multiple strands with adornments, for hanging items from diadems and earrings, for earrings themselves, on cloak pins and as trim.  Some references that I have found can be seen here, and my artifact from the Baltic part of Russia can be found here.

In The Viking-Age Gold and Silver of Scotland by James Graham-Campbell ISBN 0-948636-62-9, Page 31, Fig 17 is a diagram of what he calls Trichinopoly chainwork which he has taken from Wilson & Blunt (Which is the article "The Trewhiddle Hoard" by David M Wilson and C E Blunt in the book Archaeologia or Miscellaneous Tracts relating to Antiquity Volume XCVIII. The diagram in The Trewhiddle Hoard is page 93 Fig 4).

This diagram shows interconnected right side up and upside down U shaped loops, where each row would look something like
n u n u n u n u n u n u n - one row of wire never crosses itself, but instead arcs up and down. In “The Trewhiddle Hoard” Wilson & Blunt say, "The chainwork of the scourge is manufactured in the Trichinopoly technique, a method of circular plaiting (known as tatting) still in use among school-children in England. The chain is plaited on nails through a hole bored in a piece of wood" - this wording sounds to me like spool knitting.  I haven't tatted in a long time and my books for it are buried in my attic. However, I do remember using a shuttle to tat, so perhaps the definition of tatting has changed since 1961? or is different from England to America.  I asked someone who does tatting, and they said that this type of chain is not what modern Americans call tatting.

I have not been able to find any other sources for the word Trichinopoly prior to Wilson & Blunt's use of it.  Trichinopoly is a city in India, and that is all I can find, other than the recent use of the term to describe woven chains.  I have seen photos of similar looking chains made in India, but either the photos were not clear enough to tell how they were made, or they were made using the loop in loop technique.

Great Wire Jewelry by Irene From Peterson ISBN 1-57990-093-3 shows "Knit on 3 Nails" on pages 24-25. The illustration at the top of page 25 is pretty much what the Trichinopoly diagram shows. Viking Knit is on pages 7-11 of Great Wire Jewelry.

In Textile Techniques in Metal by Arline Fisch ISBN 0-937274-93-9, she shows several examples of knitted wire. A good one is on page 60 Fig 5, and shows the stockinette stitch which is alternating rows of knit and purl. This looks like the Trichinopoly diagram. Her version of Knitting on a spool on pages 64 and 65, shows the wire crossing.

In The Complete Metalsmith by Tim McCreight ISBN 0-87192-240-1, pages 142-143, he shows how to make what he calls a Woven Chain - sort of structurally like what is commonly called Viking Knit, but made from the other end and without a mandrel. I think this is the method that Michael David Sturlin uses to make his chains.

--- Chain on the Tara Brooch - Wilson & Blunt say it is Trichinopoly, Graham-Campbell says it is Loop in Loop, other sources I have say it is braided.

I _really_ want to see this chain and the Trewhiddle Scourge in person!  :)

Because of the differences in naming, I don't always trust what the caption of the photo says. 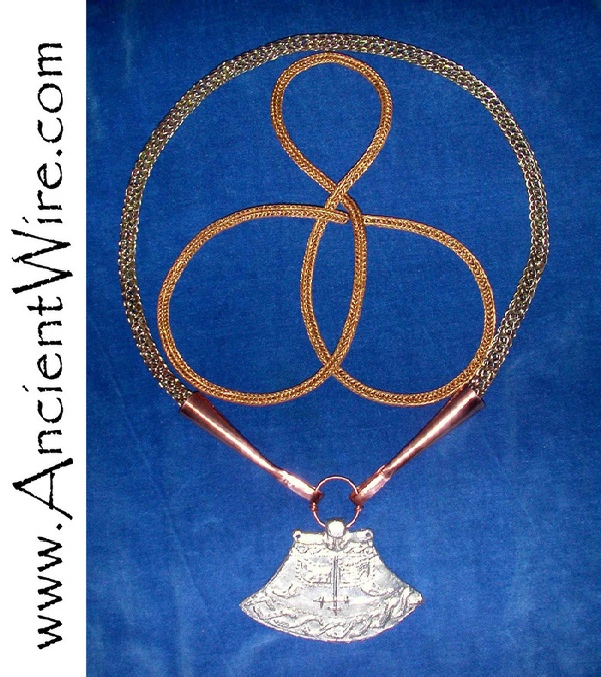 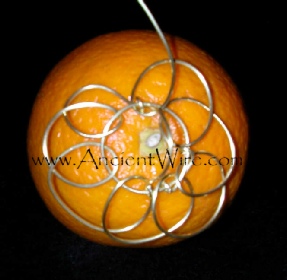 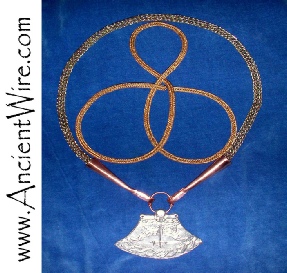